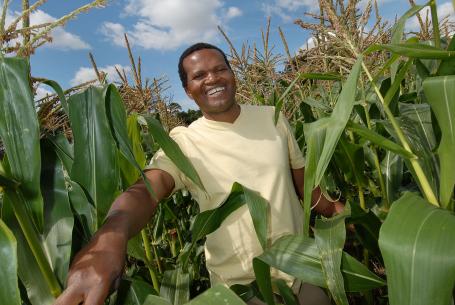 “Don’t waste your time” – This is what the president of MGA (Maize Growers Association, an independent organisation that identifies information needs for its maize growers) told David Mwanaka, a black entrepreneur, in 1996. He had identified the MGA as his first port of call in helping him to understand how he could make his dream of becoming a white maize farmer in the UK a reality, but was advised not to grow it as it could not grow to maturity in the cold UK climate. “I felt so dejected after that phone conversation and decided that I was going to grow white maize to prove him wrong”

What is white maize you ask? – It’s simply corn with white kernels instead of the yellow ones that most of us are used to. White maize is a staple food in the Sub-Saharan Africa diet, with consumption of up to 450g/person/day. It’s also popular among South American countries and is commonly consumed as white maize flour, which is used to make e.g. Arepa (Venezuela and Colombia), Ugali (Kenya), Posho (Uganda), Sadza (Zimbabwe), Fufu (Ghana) and Nsima (Zambia) to name a few.

Today David is the UK’s only white maize farmer. Having ignored agronomists from MGA, David also became the first farmer in the country to grow white sweetcorn, which he supplies to Sainsburys and Harrods. Having succeeded in growing white Maize, David also owns 2 groceries stores based in Enfield and Walsall where he sells other Afro-Caribbean foods along size his white maize and maize flour.

So how did he get there and what exactly were his beginnings? I had the pleasure of speaking with David Mwanaka to understand just that.

[Read: How this black business man started his business during a recession]

David was born and grew up in a rural part of Eastern Zimbabwe called Nyanga. Being the youngest of 10 siblings, the 20year age gap between David and his brothers and sisters meant he was the only child at home as his siblings had flown the nest by the time he was 12 years old.

“When I think about my older brothers and sisters, our relationship is more akin to a parent-child one” explains David.

Most African families in rural areas rely on subsistence farming, growing some of their own food for consumption with the excess sold to provide an income for the family. This is the type of farming that David grew up with. As a young boy, he was responsible for planting trees around the family home and it’s here that his passion for farming grew.

“This is probably the reason I became a farmer” says David.

Farming is like art. You start with a blank canvas in the form of bare soil and seeds then after 3-4 months you have art, that is a tree, bearing fruits. For me, seeing the transition of seeds to a grown tree is really therapeutic

David arrived in UK in 1991. Frustrated by the lack of free press in Zimbabwe, he hoped to continue his journalism career. However, it proved much tougher than he thought and despite gaining further qualifications in journalism in the UK, he was still unable to find the job that he wanted.

Realising that he had to put his dreams on hold, he took a range of jobs to support his wife and young children, including working as a traffic warden a.k.a public enemy No.1. “I didn’t enjoy the jobs that I did. I basically did them to survive,” and so achieving his dream of growing white maize became an outlet for his frustrations.

I didn’t enjoy the jobs that I did. I basically did them to survive

Another disappointing aspect of life in the UK was not being able to enjoy the foods that he had grown up with in Zimbabwe, including his favourite – white maize. He tried to find it in shops and markets that sold African and Caribbean food, but nobody stocked it. So, in 1996, he decided to start growing it himself, persuading the landlord of his flat in Tottenham, North London, to use a small plot of the back garden.

[Read: Female restaurateur, from working in a bookshop to owning a restaurant and property portfolio]

“My wife didn’t take me serious and felt it would be impossible to become a farmer in the UK,” he recalls.

His first efforts were unsuccessful. In fact, it took another five years and many late nights of research and experimenting before he finally grew a successful crop in 2002. However, this success was short lived as he now faced the struggle of finding farm land to grow maize.

He began by knocking on the doors of farmhouses on the outskirts of London and asking farmers whether they had any acres to let. “They all thought no, he’s up to something. I mean, if someone comes round to your door asking if you have any land to grow white maize, which you’ve never even heard of . . . it’s very suspicious.”

David’s luck finally changed when he put an advert for farm land in Loot magazine and was contacted by a journalist wanting to write a story. “At the time I wasn’t aware of any farmers publications and it was free to advertise in Loot magazine,” he explains. The ad didn’t bring any interest either, however it did attract a call from a journalist from The Observer who decided he wanted to support this black business man, and wrote an article about David’s efforts to become the UK’s first maize farmer. After the article appeared, two people approached David with land, one in Wales, which was too far, and another in Enfield. He went for Enfield as it was closest to where the family lived in Essex.

Who wants to buy white maize?

Things seemed to be looking up after David acquired the 10 acres of farm land in Enfield, the family planted and successfully harvested the first lot of white maize. However, as David solved the problem of growing the cob, he was presented with another problem of where to sell it. “We weren’t even sure if there were customers out there that were willing to buy our maize, “says David. He initially attempted to sell the crop from the boot of his car to a congregation leaving church but only managed to sell a dozen cobs.

Not one to give up, once again David turned to free newspaper ads, a tried and tested method that had previously worked for him. It was through this as well as word of mouth from diaspora communities from South Africa, Zimbabwe, Namibia and Bostwana that the orders grew as people came to know what he was doing. Today David has established his own distribution network which continues to enable him to sell his produce.

Now in 2020 David also sells other products such as pumpkin leaves, tsunga (mustard leaves), sweet potatoes, maize meal (dried maize that is grounded into flour) and much more from his farm shop in Enfield (North London) and Walsall (West midlands) as well as owning more land around UK , which is also used for farming. If these locations are not in your vicinity, that’s not a problem because Mwanaka Fresh Farm foods also deliver across the UK and Europe. Customers can buy products through Mwanaka Fresh Foods website.